[Study]The Most Dangerous Intersections in Ohio 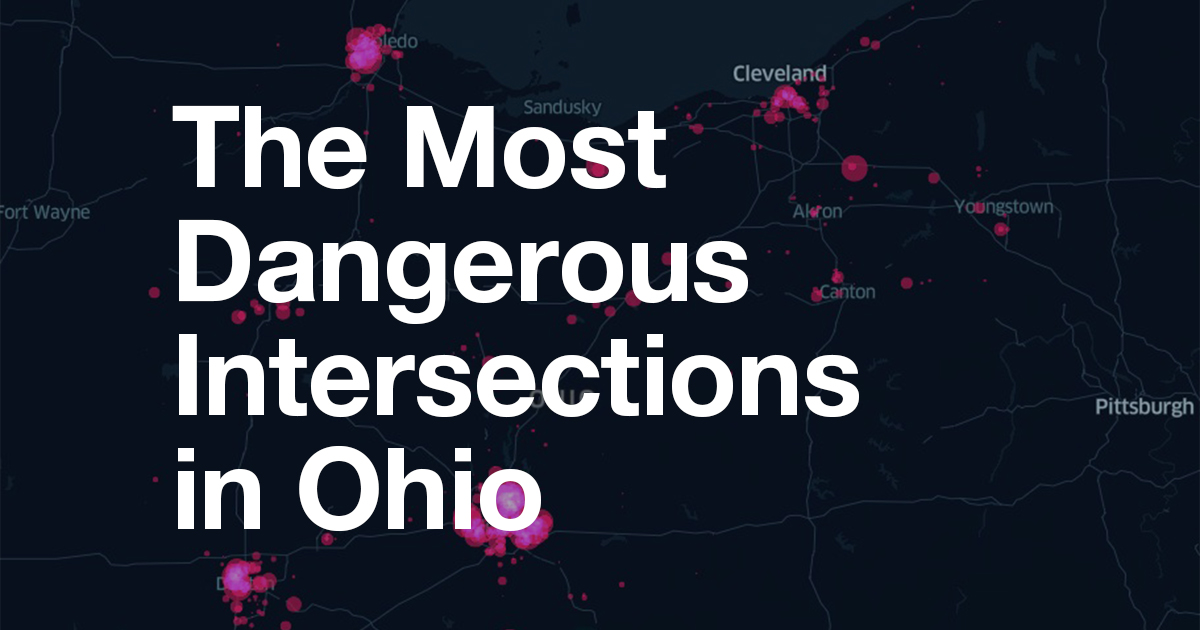 Intersection-related motor vehicle crashes are a leading cause of injury and death in Ohio.  In fact, from 2014-2019, nearly half of all collisions that resulted in injury or death occurred at an intersection.

Where are the most dangerous intersections in Ohio? Our Ohio personal injury lawyers at Elk & Elk Co., Ltd collaborated with data visualization agency 1Point21 Interactive to find out.

We analyzed six years of collision data from the Ohio Department of Transportation, isolating only crashes where an injury or fatality was reported.  The result is a comprehensive analysis of 438,553 total crashes that occurred from 2014-2019, leading to 49,819 serious injuries, 249,570 minor or moderate injuries, and 6,453 fatalities.

(This analysis also included over 325,000 possible injuries.  We decided not to use these in our danger index formula since the severity and veracity of each injury is unknown)

This interactive map shows all intersections in Ohio with a Danger Index score of 40 or above.  This map is interactive – use your mouse to click and drag and mouse wheel or gesture to zoom in and out.  Hover over each point on the map to reveal detailed information for that intersection.  If viewing study on a mobile device, rotate your device for the best viewing experience.

The 50 Most Dangerous Intersections in Ohio

The following are the top 50 most dangerous intersections in Ohio. Altogether, these 50 intersections accounted for 2,201 total crashes, leading to 1,775 total injuries (both serious and minor) and 13 fatalities.

As part of this study, we also broke down the 25 most dangerous intersections in each of the six largest cities in Ohio.

The Most Dangerous Intersection in Ohio is in Columbus

This intersection, in particular, was home to 71 total crashes, leading to 52 minor injuries, 3 serious injuries, and 2 fatalities. At the southeast corner of the Forest Park East neighborhood, this intersection joins two of the busiest major arterial roads in northeast Columbus. Arterial roads are those with wide lanes, high traffic, and speed limits that are more suited for highways than city streets – all major contributors to decreased road safety.

Morse Road is a major east-west connector road, with 6 lanes of traffic and major businesses and shopping centers along its route. The constant stop-and-go of traffic, combined with vehicles entering and exiting these shopping centers, can be a major contributor to the high incidence of crashes here.

Additionally, it is important to note that this intersection has an intricate layout when traveling westbound on Morse, with lanes widening and then shrinking to fit whatever lanes necessary to turn onto Cleveland Avenue. Three lanes widen suddenly to 6 for turning lanes, only to shrink immediately back to three lanes after passing Cleveland. This, combined with a huge intersection area, may disorient newer drivers – as well as those who may be driving while distracted.

This is an especially alarming statistic, considering the circumstances: Miami Township is fairly small, even by Ohio city standards, with a population of roughly 41,000 residents. By comparison, Columbus has nearly 20 times the population.

The high incidence of collisions leading to serious injuries here may be due to a number of factors:

Further, as mentioned previously, this is another example of a major arterial road with potentially confusing road flow and large intersections – a recipe for dangerous car accidents in those not paying full attention to the road.

UPDATE:  It appears that safety improvements may be on the way for this intersection and the roads around it.  June 30th, 2020, ODOT closed a virtual public meeting about the project.  No results were available at the time of this study.

Ranked fifth, this intersection in Toledo was home to 78 total crashes, leading to 36 minor injuries and 9 serious injuries. Despite being an intersection in the fourth-most populous city in Ohio, this particular location had an incredibly high number of total crashes – more collisions than the most dangerous intersection on our list. Second, only to a Cleveland intersection ranked 18th.

At first glance, there is not much that may explain the high incidence of crashes: although Airport Hwy is a state roadway, it is fairly narrow, with two lanes on each side – and a manageable 40mph speed limit. Additionally, this is a quiet, predominantly residential area of Toledo, so there is not much high traffic.

However, this high incidence might be due to its close vicinity to The University of Toledo Medical Center, connected to this intersection by Byrne Road. This may contribute not only to the high volume of traffic, along with drivers who are traveling with urgency to the hospital for immediate medical care. Speeding and not paying full attention can be especially dangerous in residential areas with narrow lanes, where speeds can suddenly pick up and slow down erratically.

Interestingly, the intersection two blocks north of this one, on Byrne Road and Hill Avenue, is also on our list, ranked 14th. This may indicate that Byrne Road, in general, may have a high amount of traffic, contributing to a higher incidence of collisions.

This is all the more concerning when population is taken into consideration: Townsend Township is a rural community with just over 1,500 residents. By comparison, the 8th ranked intersection in Dayton has the same number of serious injuries – despite having a population that is 100 times larger than that of Townsend Township.

Two factors may explain this intersection: the rural setting and the lack of signals. Rural settings invite drivers to bend the rules of driving a bit more, taking fewer safety precautions as there are fewer people around. This can include speeding, not wearing a seatbelt, not using proper turn signals, etc. Compounding with the fact that both US-20 and OH-601 are single-lane roads in each direction, this can be a recipe for disaster.

Additionally, this intersection is not governed by signal lights but rather a two-way stop sign at OH-601. Any attempts to turn from OH-601 to US-20 can be hazardous – especially if vehicles are speeding along and not prepared for vehicles to turn into the highway.

Drivers are always advised to practice safe driving – even in rural communities where there are few cars on the road.

Although the only intersection located in Cleveland on this list is ranked 18th, it also happens to have the most total collisions of any other intersection in our analysis. Looking at its location, it is clear why: the intersection is an entire mishmash of roads connecting, redirecting, and diverting highway traffic to other roads, highways, and interstates. It is reasonable to assume that a significant amount of traffic passes through this intersection as drivers make transitions from one highway to another – a task that can be incredibly difficult under high traffic situations.

This may serve to explain the high incidence of crashes but zero serious injuries: many of the collisions here may occur in low-speed, high-traffic situations, amounting to fender-benders where bumps and scrapes are the result.

Unfortunately, short of a major rehauling of the highway junction system here, there do not seem to be any easy changes to improve safety.

Distracted Driving is Likely a Huge Factor – But That May Change

When considering the possible causes for these high incidences of accidents, Ohio authorities believe that distracted driving is the primary contributing factor to serious car accidents in the state. According to the Ohio State Highway Patrol, over 91,000 car accidents since 2013 have occurred due to distracted driving – leading to over 47,000 injuries and 305 fatalities.

Part of the reason distracted driving has been such a large factor in car accidents in Ohio is that the state has categorized it as a secondary offense. Law enforcement cannot pull over vehicles due to secondary offenses; these can only be charged if you are pulled over for a separate infraction. This means drivers who may have engaged in distracted driving have not been caught because they otherwise practice “safe” driving.

Fortunately, in February 2020, the state introduced the Hands-Free Ohio Bill, which aims to make distracted driving a primary offense. Although the bill is still currently under legislation, it can hopefully curb the influx of serious car accidents and reduce the total number of distracted drivers on the road.

It remains to be seen whether further improvements can be made to ensure the safety of drivers in Ohio, but studies like these will hopefully inform enough people to empower change and improvement in driver safety across the board.

For more information on the methodology, data sources or takeaways of the study, please contact our Ohio car accident lawyers today.