The Most Dangerous Intersections in Cleveland

Although Cleveland is the second biggest city in Ohio, it was home to just one intersection on the top-50 list of dangerous intersections in the entire state. Despite these findings, our analysis has found that there are still intersections within the city that are cause for concern. 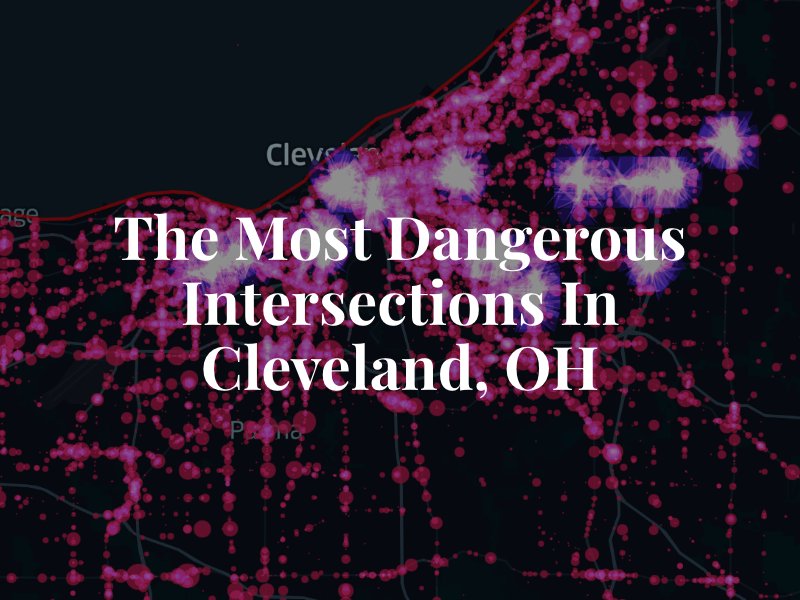 The result is a comprehensive list of the most dangerous intersections and zones in Cleveland from 2014 to 2019.

The top 25 most dangerous intersections highlighted below accounted for 898 total car crashes, which led to 379 minor injuries, 51 serious injuries, and 4 total fatalities.

The 25 Most Dangerous Intersections in Cleveland, Ohio

Cleveland vs Other Ohio Cities

It is worth noting that Cleveland only has one intersection of note in the statewide top-50 list of dangerous intersections, despite being second only to Columbus in population. Some smaller cities such as Dayton and Toledo not only have more intersections – they also have several intersections that rank higher than Cleveland’s sole intersection.

Although this may indicate that Cleveland is a much safer city for drivers than some other cities in Ohio by comparison, it is important to note that this study only accounted for collisions that 1) occurred near an intersection and 2) involved an injury or a fatality. These figures do not account for potential interstate/freeway crashes or fatalities, nor do they take noninjury collisions into consideration. The actual number of injury crashes, fatalities, and total collisions may certainly be much higher than our study indicates.

The Most Dangerous Intersection in Cleveland

The most dangerous intersection in Cleveland is located on Orange Avenue & 30th Street, home to 89 total crashes, leading to 28 minor/moderate injuries and no serious injuries or fatalities. In our statewide analysis, this intersection has the most total collisions of any other intersection in Ohio.

Upon closer look, the prevalence of high crashes is clear: the intersection is a tangled knot of roads interconnecting to other streets, highway exits re-routing into other highways, all in fairly narrow roads. In addition, this appears to be a highly trafficked intersection, as a common route that many commuters and truck drivers use to switch onto certain freeways, highways, and interstates. That many cars in such a concentrated, small intersection can inevitably lead to a greater chance of collisions.

This may also explain the relatively low amount of injuries and no fatalities, despite high collision numbers. Due to the congestion and slow speeds inherent in this intersection, it may have a higher incidence of fender benders and minor car accidents – which then may result in minor bumps and bruises at best.

Further, all of these intersections occurred between 93rd Street and 140th Street – a 2-mile stretch of Kinsman Road that cuts through the Woodland Hills and Mount Pleasant neighborhoods.

There is nothing immediately clear here that may explain why this small stretch has such a high incidence of crashes. However, it is an arterial road that sees heavy daily traffic – and more cars always increases the chances of a car accident considerably.

The intersection of Ridge Road & Brookpark Road, located in the Parma suburb, is ranked 3rd solely due to its high incidence of injuries. Consider that this intersection is home to a modest 24 total crashes – less than a third of the total crashes in the top-ranked intersection. However, these collisions led to 18 minor injuries and 8 serious injuries – indicating that all of the crashes that occurred here led to an injury of some form.

Additionally, there are a number of major retail stores and shopping chains within close proximity to this intersection – further increasing stop-and-go traffic as vehicles enter and exit parking lots.

In addition to dangerous intersections, we also analyzed crash data to determine specific areas where crashes and injuries were most common. These areas were designated as zones – clusters where there was a high incidence of collisions within close proximity to each other. 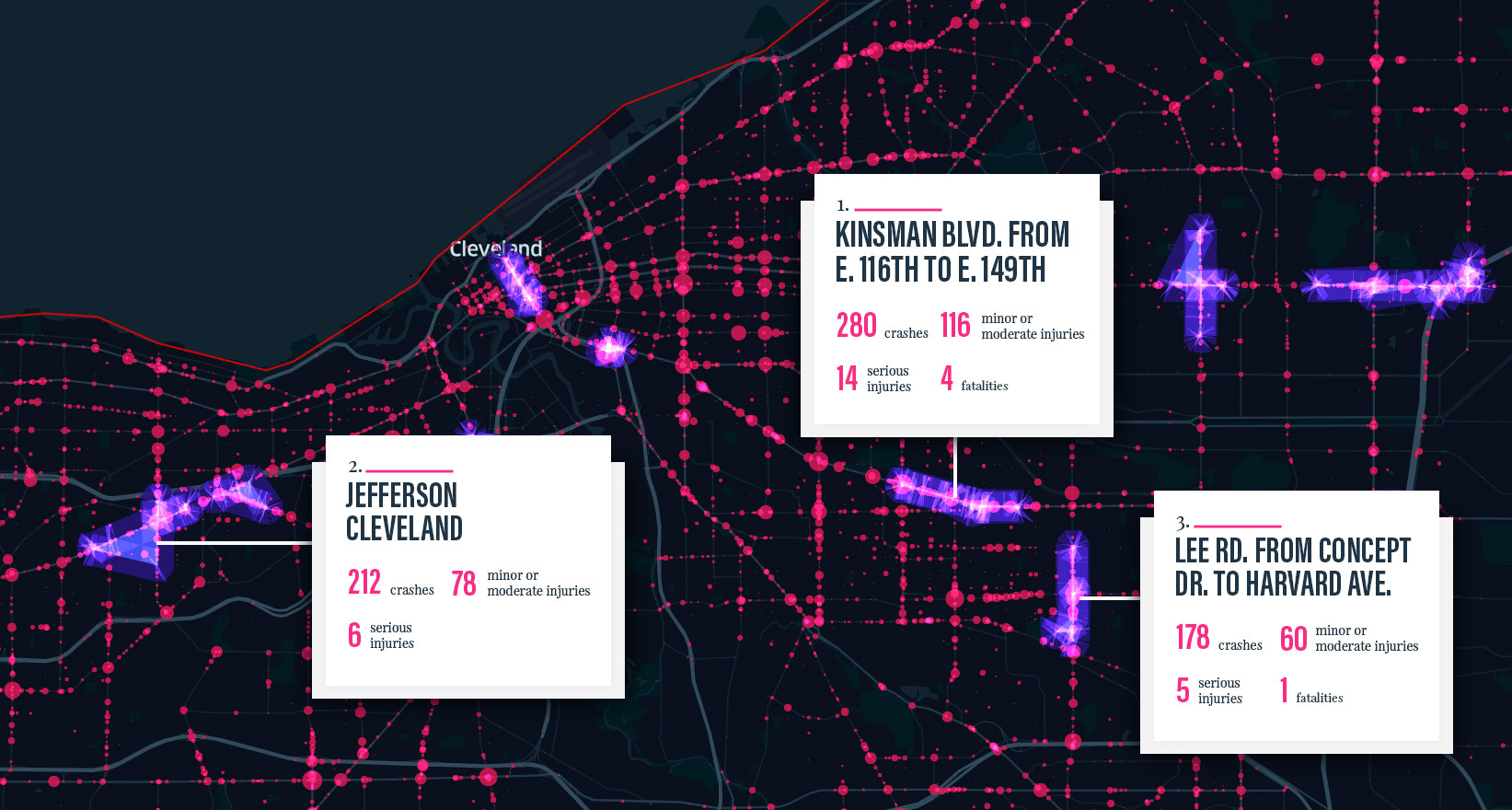 Looking at these data from a regional perspective allows us to take a big-picture look at any issues at the neighborhood level that may contribute to driver safety in that area.

The most dangerous zone in Cleveland is located in the Mount Pleasant neighborhood, with 280 total crashes, 130 total injuries, and 4 fatalities. Interestingly, this zone is located right along Kinsman Road – the aforementioned road with a high number of dangerous intersections.

This further affirms the theory that Kinsman Road may be a dangerous accident corridor – and its safety must be fully investigated to ensure the safety of all who drive along that road.

Other notable zones in Cleveland include:

How COVID May Impact Driver Safety

It is important to note that the recent coronavirus pandemic may certainly have a significant impact on driver safety in the city of Cleveland – and in Ohio in general. According to the Ohio State Highway Patrol, the number of collisions has significantly decreased in the months following nationwide lockdowns and shelter-in-place orders. April, in particular has seen a sharp decrease in crashes.

However, despite these seemingly promising statistics, the hot spots in Cleveland nonetheless remain epicenters for motor vehicle collisions. Kinsman Road, in particular, in remains a street where a high number of serious car accidents have occurred in the midst of a pandemic, including:

Many of these may be attributed to the result of driver safety actually declining in the midst of lockdowns, as the decrease in vehicles on the road has resulted in drivers operating vehicles in a more reckless manner.

Regardless, it remains to be seen if these recent circumstances will have any long-term impacts on driver safety in Cleveland and Ohio.