The Most Dangerous Intersections in Columbus 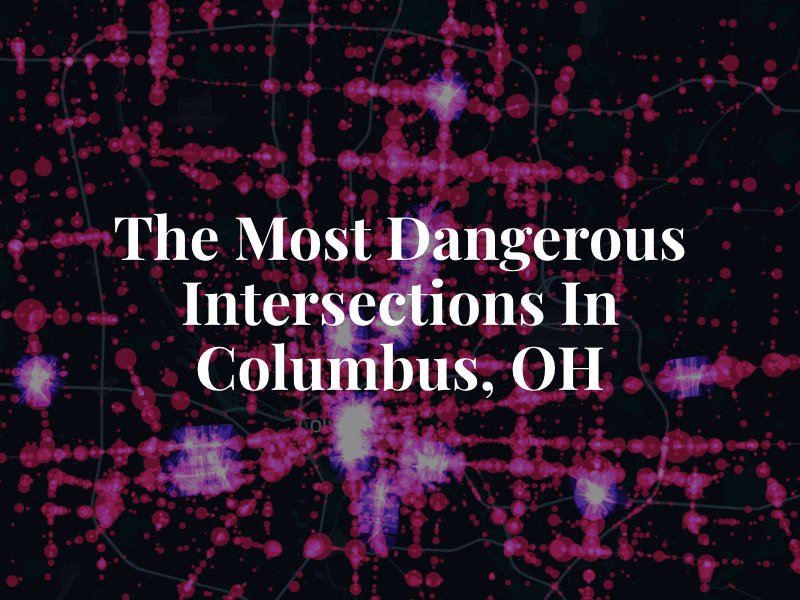 In Columbus, the 25 intersections highlighted below accounted for 1135 total car crashes, which led to 840 minor injuries, 99 serious injuries, and 4 total fatalities from 2014 – 2019.

The 25 Most Dangerous Intersections in Columbus, Ohio

Columbus, Compared to Other Ohio Cities

The high population of Columbus is certainly a contributor – it has more than twice as many people as the next most populous city, Cleveland. Still, Cleveland only has 1 intersection on the statewide list – indicating that other factors may also be at play to contribute to the danger in Columbus’ streets.

The Most Dangerous Intersection in Columbus

Located at the southeast corner of Forest Park East, this intersection was home to 71 total crashes, leading to 52 minor injuries, 3 serious injuries, and 2 fatalities. Although no immediate causes seem to be apparent, it is worth noting that this intersection is at the junction of two major arterial roads. These are roads that serve essentially the same function as highways, with high speeds, wide lanes, and high traffic – except located in a city-type environment, where there may be shopping centers and other businesses lining the street. A combination of high speeds plus vehicles entering and exiting parking lots result in a high chance of accidents occurring if drivers are not paying full attention.

This intersection, in particular, may have the highest incidence of crashes due to the junction of arterial roads, combined with the relative complexity of signals and lanes at the intersection. Morse Road, in particular, seems to undergo significant changes through this intersection: when traveling westbound, 3 lanes suddenly become 6 to accommodate drivers making turns – and just as suddenly reverts back to 3 as soon as the road passed Cleveland Avenue. This, combined with the sheer space and size of the intersection itself, may be a primary contributor.

Although it is clear that Morse Road is a major throughway for Columbus, our analysis indicates that it may also be a major factor in car accidents. According to our study, 5 of the top 25 most dangerous intersections in Columbus occur on Morse Road.

This includes the intersection of Karl Road & Morse Road, ranked third with 56 total crashes leading to 55 minor injuries and 2 major injuries. This junction, approximately 1.5 miles west of the aforementioned top-ranked intersection, tallied the most minor injuries of all intersections in Columbus. In addition, Morse Road accounts for 3 of the 4 total fatalities that took place in our top intersections.

Further, all of these intersections occur within a 3-mile stretch of Morse Road. These findings indicate that further investigations must be conducted into why exactly so many accidents are occurring here – and what can be done to improve driver safety.

Along with identifying dangerous intersections, our deep dive into each city flagged high collision zones, areas where a high volume of intersection related crashes occurred in close proximity to each other.

In contrast to intersections, these zones provide a bigger-picture insight into regions and/or blocks that may have pressing issues regarding traffic and driver safety – valuable data when analyzing the safety of shopping districts, nightlife corridors, and more.

The most dangerous zone in Columbus occurs in North Linden, along Cleveland Avenue with Oakland Park Avenue at its midpoint. This zone accounts for 227 total car accidents, leading to 133 minor/moderate injuries and 16 serious injuries.

Stretching from the Northern Lights Shopping Center to Arlington Avenue, this zone contains a stretch of Cleveland Avenue that is heavily-trafficked – despite being as narrow as 2 lanes on one side. Although not a traditional arterial road, this is clearly a road that sees a high volume of vehicles on a daily basis. This may explain the high incidence of crashes and subsequent minor to moderate injuries – indicating that most of the collisions here occur at relatively low speeds.

Nonetheless, 227 total crashes is a concerning amount of collisions – especially considering the zone encompasses a segment of Cleveland Avenue that is only 1.5 miles long.

Other Notable Zones in Columbus

Located centrally in downtown Columbus and framed by North Third Street and East Spring Street, this zone ranked second with 215 total crashes, 141 total injuries, and 2 fatalities. The high incidence of crashes here is unsurprising – downtown areas of cities are typically densely packed and highly-trafficked, increasing the chances of collisions. Additionally, one-way roads are common in downtown areas, which can cause some confusion for inattentive drivers.

All of these parameters match with downtown Columbus – and matches up with the prevalence of minor to moderate injuries but low serious injuries.

The third-ranking zone in Columbus is located in Hilltop, one of the largest suburbs in Columbus. Located along Sullivant Avenue, this zone was home to 192 total crashes, leading to 125 total injuries and 1 fatality.

Hilltop is widely known as an aging neighborhood that has fallen on hard times through subsequent economic downturns. Dilapidated housing and lack of local businesses has resulted in a sudden increase in crime and drug use throughout the neighborhood – and unfortunately, Sullivant Avenue is largely considered the epicenter of it all.

With a lack of major businesses from Hague Avenue to the Franklinton neighborhood, the Sullivant corridor has become a fixture where drugs, crime, and prostitution are prevalent. This, combined with the aging demographic of the residential population, has contributed to a street where both resident safety and driver safety are a big question.

It is worth noting that Indianola Terrace is considered part of the “University District,” a series of neighborhoods within close vicinity to Ohio State University. In fact, according to the University District homepage, Indianola Terrace is the “focus of off-campus student life,” home to spacious mansions and other estates that the university’s fraternities and sororities call home.

Such a large contingent of college students concentrated in one neighborhood may be a major contributor to the high incidence of serious car accidents – especially if factors such as drinking and driving, distracted driving, and other teenage driving habits are taken into consideration.

It is important to note that this study is a look at a small segment of road safety in Columbus as a whole. Our analysis only considered accidents that occur at intersections and those that directly resulted in injury or death – indicating that the problem of driver safety may actually be a larger problem than is indicated here. The quantity of injury and/or fatal accidents may be much higher than is conveyed in this study – especially if they happen on highways or non-intersection circumstances.

Additionally, it is important to note the significance of current events and their impact to driver safety. The COVID-19 pandemic has certainly affected driver safety in Ohio – although it remains to be seen whether it has had a positive or negative impact. According to data released by the Ohio State Highway Patrol, the number of reported collisions has plummeted – especially in April of this year.

However, other sources have stated that, while collisions are decreasing, the number of reckless drivers has sharply increased. Some authorities speculate that this is due to the sudden decline of vehicles on the road; with fewer people sharing the road, some drivers feel more empowered to drive faster and more recklessly.

As the coronavirus crisis subsides (if it ever does), it will be interesting to see if this trend continues – and what happens to these reckless driving habits when there are suddenly more vehicles on the road. Additionally, as people who have not driven for months regain their muscle memory, there may actually be a spike in minor accidents as a result.