The Most Dangerous Intersections in Akron

While Akron may have the safest intersections among Ohio’s largest cities, there are still notable intersections with a relatively high incidence of injury accidents – and may thus require further attention.

By analyzing the crash data used for our previous statewide study, we pinpointed 25 of the most dangerous intersections in Akron. 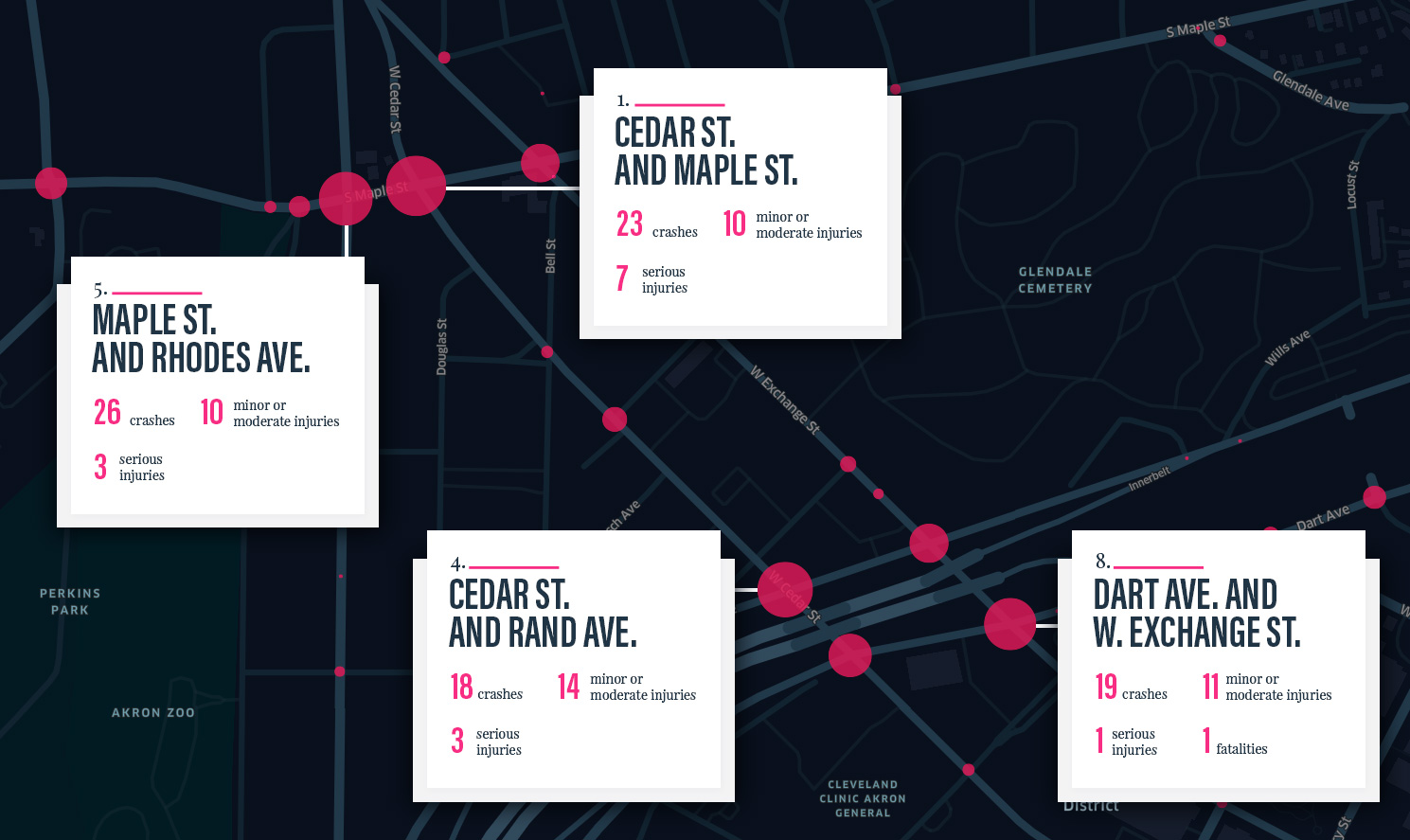 The 25 Most Dangerous Intersections in Akron, Ohio

In Akron, the most dangerous intersection is on Cedar Street & Maple Street, tallying 23 crashes, 10 minor/moderate injuries, and 7 serious injuries. Maple Street is a major through-road that cuts through West Akron, so it sees a considerable volume of traffic that can contribute to a higher chance of collisions. Additionally, Cedar Street is a one-way road, which can pose problems even for those who are familiar with the layout of these streets.

Maple Street in general may be the site of many car accidents – the intersection of Maple & Rhodes Avenue, just one block west, was the fifth most dangerous intersection in our analysis, accounting for 26 crashes, 10 minor/moderate injuries, and 3 serious injuries. This usually indicates high traffic is a major factor, but further investigation is necessary to determine a definite cause.

Some Neighborhoods Had More Dangerous Intersections Than Others

In other Ohio cities, we conducted a geospatial analysis to pinpoint high-injury-accident intersections within close proximity to each other, ranking these “zones” based on danger level. This is done in order to look at the data in a bigger-picture perspective; neighborhoods or blocks where zones occur may have an inherent driver safety issue that may not be immediately apparent when looking at singular intersections.

In Akron, there were no zones that fit the required minimum Danger Score criteria. However, our findings did indicate that there were neighborhoods and blocks within Akron that had a high concentration of ranked intersections than others.

Along with Maple Street above, these neighborhoods had a high concentration of more dangerous intersections than other neighborhoods in Akron.

The Hospital District of Akron was home to 4 dangerous intersections from our list:

Altogether, these four intersections accounted for 70 crashes leading to 45 minor/moderate injuries, 5 serious injuries, and 1 fatality. All four of these intersections were closely located within the vicinity of Akron’s major medical centers: Akron Children’s Hospital and Cleveland Clinic Akron General.

Neighborhoods with major medical centers typically have higher incidences of accident due to their proximity to major metropolitan areas and high-speed highways and arterial roads. Akron’s Hospital District meets all of those requirements, so it is no surprise that there is a high incidence of dangerous intersections in this area.

These intersections totaled 56 crashes, 47 minor/moderate injuries, and 3 serious injuries. All were in close vicinity of the bustling arts district of Akron, within just one block of the Akron Art Museum. In fact, three of the four intersections were directly adjacent to each other.

Interestingly, two adjacent major blocks of Tallmadge Avenue in the North Hill neighborhood were high-accident intersections, with both ranking within the top 10 of 25 dangerous intersections:

It is not immediately apparent why this short stretch of Tallmadge seems to attract injury accidents; the road is a fairly narrow street with one lane going each way. Typically, major arterial roads with multiple lanes on each side and high speed limits are the main reason that certain roads have a high volume of intersection crashes. Further investigation will certainly need to be done to determine why these two intersections are so dangerous.

It is important to note that this data does not necessarily mean that Akron is the safest driving city among all other major cities in Ohio. Our analyses are done with two variables in mind: accidents that only occur in intersections, and those that result in injury or death.

Therefore, the actual number of accidents is considerably higher than what is reported in this study, because it has not taken highway accidents and non-injury accidents into consideration.