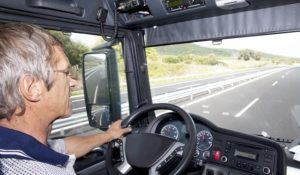 Nearly 6 million Americans are Commercial Motor Vehicle (CMV) drivers, and most of them drive the semi and tractor-trailers you see crisscrossing highways and interstates across the country. For these drivers, who spend days and weeks at a time on the road, it can be challenging to maintain a healthy lifestyle. Numerous studies have linked the driving profession with having some of the highest risk factors for health issues such as cardiovascular disease, diabetes, sleep apnea, high blood pressure and obesity.

The Link Between Healthcare and Truck Driver Safety

With low access to dependable healthcare, many drivers may not even be aware of the serious conditions that may be impacting not only their health, but their ability to drive safely. If you have been involved in a truck accident, contact our Columbus truck accident lawyers today.

According to a 2017 study published in the Journal of Occupational and Environmental Medicine, drivers suffering from serious health issues, and particularly those with multiple problems, had increased incidents of preventable crashes. The findings showed that as health issues piled up, so too did the likelihood of a driver being involved in an accident.

Working as a professional driver for a living puts employees in an environment and lifestyle where the risk for these kinds of medical issues is elevated. At the same time these drivers often find themselves hundreds of miles away from their own physicians for extended periods.

This study is one of the first that shines a light on the danger created by a profession with a high frequency of heart disease, obesity and high-blood pressure that operates day-in and day-out at high speed among passenger vehicles.

The study’s findings should come as no surprise.

We’ve all had to drive at a time when we weren’t feeling our best, and it’s hard not to recognize the impact even a minor illness can have on a driver’s reaction time, attention or just how well they can focus on the road.

What stands out, rather, is how prevalent this problem is among commercial drivers. While the Federal Motor Carrier Safety Administration (FMCSA) requires a medical examination at least every two years, the frequency of serious health concerns among drivers remains higher than many other professions. The 2017 JOEM study joins other previous studies in suggesting that the poor health among drivers may be attributed to a lifestyle that often includes high risk factors, such as “improper diet, inadequate physical activity and poor sleep hygiene.”

That commercial drivers may have their health compromised is not new information. What is new is the evidence that many drivers are suffering from more than one condition and how influential those multiple conditions are to the frequency of preventable crashes. In particular, the study found that the “risks of being in a crash were elevated among truck drivers with either three, or four or more medical conditions.”

In a 2017 interview with Trucker.com, one of the study’s authors, Matthew Thiese, identifies a need for trucking employers to help. In the article, Theise says carriers need to get involved, “whether it’s encouraging drivers to try and get treatment for some of these [conditions] or promoting wellness, promoting healthy eating, [and] having these types of programs.”

Health is a truck safety issue

In 2007, the FMCSA conducted a Large Truck Crash Causation Study, and attempted to identify common issues that they characterize as critical to large truck safety. These include issues such as:

Unfortunately, the word health is not mentioned once in the study. This is in part attributable to the relative infrequency of studies at the time and since that identify a link between health and truck safety. However, those studies that have looked at the issue of driver health have consistently identified both a high incidence of medical issues among driver and a linked increase in the number of accidents involving seriously ill drivers.

While the above identified issues are all legitimate concerns to address in terms of truck safety, a new and intensified focus on the health of commercial drivers as a road and public safety issue seems warranted.

The Prevalence of Semi Trucks

In 2015 there were more than ten-million single-unit and combination trucks on the roads, highways and interstates of the United States. Those vehicles racked up more than 16 billion total miles and carried more than 11 billion tons of freight.

In that same year, nearly 12 percent of all fatal crashes across the country involved at least one large truck or bus. When you consider that the average car is only 4,000 lbs, when compared with a fully loaded semi truck which may weigh, in total, more than 70,000 lbs, it’s not hard to imagine how serious any collision with a commercial truck can be.

The truth is that we are a culture that depends on the transportation of large freight across major distances, and we rely on commercial drivers to keep our grocery stores full, our latest tvs in stock and our Amazon deliveries showing up on time. At the same time, that only makes it all the more important for the people and institutions responsible for public safety to ensure that drivers are physically primed for the stresses and demands of a difficult job.

It is evident that health issues are both common among truck drivers and a potentially significant factor in the frequency and severity of a crash. Providing effective and accessible health care for drivers isn’t just a public safety issue, it’s a driver safety issue. At the heart of this problem is an accepted lifestyle that puts drivers in a position to contract serious illness due to environment and lifestyle.

An effort to change the status quo is a win both for the public and the drivers themselves.

The reality, however, is that truck accidents remain a serious problem, and one that can leave individuals and families facing unnecessary pain and hardship. It’s a situation our attorneys have seen firsthand. To find out more about how our firm helps people can hold carriers responsible for the damage they cause, either by putting unsafe trucks or unsafe drivers on the road.