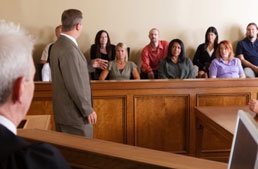 The criminal trial of George Zimmerman is over, but he may find himself in a courtroom again. The family of shooting victim Trayvon Martin could file a civil suit against Zimmerman for the wrongful-death of Trayvon. Although the Fifth Amendment of the U.S. Constitution prevents a defendant from being tried for the same crime twice, a concept known as double jeopardy, it does not prevent an additional civil action. A lawyer for the Martin family said that while not a certainty, such a trial remains an option for them to seek justice – something the family felt was denied in criminal court.

The standards for proving wrongful death vary from state to state. In Florida, the controversial “stand-your-ground” statute requires a pretrial hearing to determine if the defendant used deadly force only because he was in reasonable fear of death or serious injury. If Zimmerman is successful in his “stand-your-ground” hearing, the civil suit would be dismissed. This could leave the Martin family responsible for paying Zimmerman’s attorneys’ fees, expenses, as well as compensating him for any loss of income or other costs he may have incurred during the proceedings.

However, if Zimmerman does not win his “stand-your-ground” hearing, the civil trial would commence. In order to be successful, the Martin family would only need to prove by a preponderance of the evidence that Zimmerman’s negligence caused Trayvon’s death. The civil suit would have a new judge, jury, and possibly new evidence. That is because some protections afforded in a criminal trial do not apply in a civil case. For example, while Zimmerman elected not to testify during his criminal trial, he could be compelled to testify in a wrongful-death suit.

Ohio currently has what’s known as the “castle doctrine.” It gives people the right to defend themselves with force in their homes, their vehicles or the vehicles of immediate family members. If a person feels threatened somewhere other than those locations, he or she currently has a “duty to retreat”— however, that may change. State Rep. Terry Johnson proposed new legislation similar to Florida’s “stand-your-ground” law in June. If passed, it would allow for the use of deadly force without the duty to retreat and ease restrictions on carrying concealed weapons.