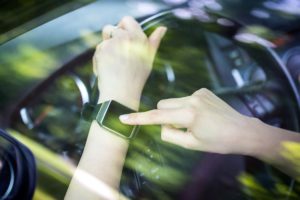 When you think of distracted driving, what comes to mind?

But there are other forms of distracted driving as well – many of which can be very dangerous.

A study conducted by the University of Texas at San Antonio found that drivers who wear a wearable technology device can be as distracted as those who are texting while driving.

Wearable technology can include:

These devices are designed to be easy to access and use. But this very design may actually make the devices as or more dangerous than phones, depending on how they are used.

A total of 20 volunteers from the university participated in the study. The participants used a driving simulator, while simultaneously using Google Glass or a smart phone.

The results were telling. While the wearable technology allowed the drivers to quickly and easily respond – it also gave participants a false sense of security, making them more likely to engage with the device.

Anything that takes a driver’s eyes and attention off the road can pose a threat to the driver’s safety and the safety of other motorists. This includes wearable devices that are designed to be extremely user friendly. Drivers may feel safe using the devices while driving, but they are still distracting the driver.

Truly, the only safe approach to distracted driving is a zero tolerance approach. This means putting phones and wearable devices out of reach. Drivers should focus on one thing – driving safely, without distractions.