How safe is GPS use while driving? 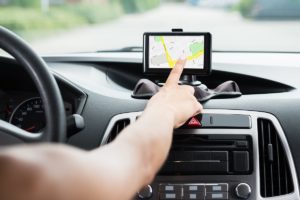 When you think of distracted driving, what comes to mind?

Most people think of talking on a cell phone or sending a text message while driving. But there are many other forms of distracted driving that can be just as dangerous.

One of those actions is using a GPS while driving. Most people use their phones to operate a GPS – either through an app or using the phone’s map. But these actions can require a driver to take his or her eyes (and attention) off of the road:

Any of these actions can take a driver’s attention off of driving – and ultimately cause an accident.

While GPS use is often necessary for drivers, there are a few things drivers can do to keep themselves safe:

These tips can go a long way in helping a driver avoid an accident when using GPS. Additionally, the driver should avoid any device use while driving, such as talking or texting. Ultimately, the driver’s attention should be on driving responsibly and arriving to the destination safely.