Protect your family from the West Nile Virus 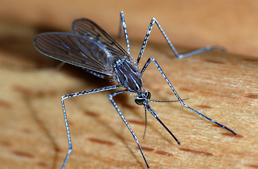 If you watch the news at all, you probably have heard about all the West Nile cases popping up this summer. According to the Centers for Disease Control and Prevention, the U.S. is on track for 2012 to be the worst year on record for cases of the West Nile Virus.

Dr. Lyle Peterson, director of the division of vector-borne infectious diseases at the Centers for Disease Control, told reporters, “We don’t really know why it’s worse this year than in previous years.” However he noted that the unseasonably hot weather from the mild winter and early spring and summer may play a role.

In order to protect yourself and your family, it is important that you be informed about West Nile Virus and what experts say you can do to keep your family safe.

What is West Nile Virus?

West Nile Virus is a flavivirus commonly found in Africa, West Asia, and the Middle East. The CDC believes the virus first made its way to the U.S. in 1999.

How Can I get WNV?

Mosquitoes become infected when they feed on infected birds, which may circulate the virus in their blood for a few days. Infected mosquitoes can then transmit West Nile virus to humans and animals while biting to take blood. The virus is located in the mosquito’s salivary glands. During blood feeding, the virus may be injected into the animal or human, where it may multiply, possibly causing illness.

What Are the Symptoms of WNV?

Most people infected with West Nile Virus will never show any symptoms. For those who do, the symptoms usually start to surface anywhere from 3 to 15 days after infection.

How can you prevent West Nile Virus?

According to the CDC, prevention measures consist of community-based mosquito control programs that are able to reduce populations and personal protection measures to reduce the likelihood of being bitten by infected mosquitoes.

The easiest and best way to stop the spread of West Nile Virus is to prevent mosquito bites. Here are some ways you can do that.

These tips and this information will help keep your family safe as summer winds down. So be safe and enjoy the rest of your summer.