Has the Essure birth control implant caused you serious injuries?

Elk & Elk’s Medical Device Attorneys are here to help. The Essure birth control device may move inside the body, leading to serious complications.

UPDATE: In July 2018, Bayer announced it would end sales of Essure in the United States. Visit our blog to learn more.
If you or a loved one used or received the permanent birth control device Essure after 2002 and were forced to undergo a hysterectomy or other surgery to remove the device, or suffered serious complications such as an unintended pregnancy, miscarriage or punctured internal organs, you may be entitled to money damages. 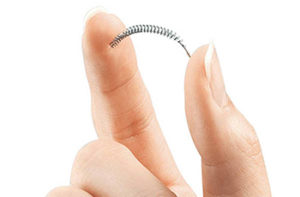 The Essure permanent birth control device is a flexible coil, comprised of a nickel-titanium alloy and polyethylene (PET) fibers. Doctors insert a coil directly into each fallopian tube, where they expand. The PET fibers cause scar tissue to develop, eventually blocking the tubes, preventing fertilization.

Conceptus introduced Essure in 2002. At the time, the implant was considered a breakthrough because it offered women an alternative to surgical sterilization. In 2013, Conceptus was acquired by Bayer.

In 2015 and 2016, the FDA received over 10,000 medical device complaints. In 2016, 30 deaths were also reported: four adult women, 18 pregnancy losses, two infants and a stillborn. The most common issues with Essure include extreme pelvic and abdominal pain, heavier menstrual bleeding, migraines, fatigue, weight changes, pregnancy, pregnancy losses, patient-device incompatibility (allergy), breakage and migration of the device throughout the body, as well as the coil cutting into the uterus and other organs.

On Feb. 16, 2016, Congressman Mike Fitzpatrick of Pennsylvania wrote a letter to the FDA in which he says that an independent report reveals 303 fetal deaths have been caused by Essure.

Fitzpatrick, the author of the bipartisan E-Free Act [H.R. 3920], which calls for the ban of Essure, has also brought attention to a complaint filed on behalf of several states alleging Bayer paid illegal kickbacks to doctors for prescribing Essure.

In November 2016, the U.S. Food and Drug Administration added a “black box warning” label for Essure.

WARNING: Some patients implanted with the Essure System for Permanent Birth Control have experienced and/or reported adverse events, including perforation of the uterus and/or fallopian tubes, identification of inserts in the abdominal or pelvic cavity, persistent pain, and suspected allergic or hypersensitivity reactions. If the device needs to be removed to address such an adverse event, a surgical procedure will be required. This information should be shared with patients considering sterilization with the Essure System for Permanent Birth Control during the discussion of the benefits and risks of the device.”

This type of warning is the strongest label the FDA can require on a device and is “designed to call attention to serious or life-threatening risks.” The agency also mandated a new clinical study to assess heightened risks linked to the device.

If the Essure device has caused you serious injuries, call 1-800-ELK-OHIO or click here to fill out a form.