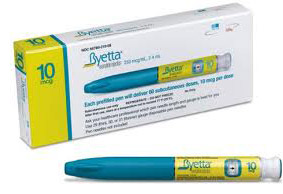 The popular Type 2 Diabetes drug Byetta has been linked to an increased risk of dangerous side effects in a study conducted by the Larry L. Hillblom Islet Research Center at the University of California, Los Angeles.

The drug injury attorneys of Elk & Elk are investigating cases involving Byetta. Possible side effects include:

Exenatide, marketed as Byetta, was approved by the U.S. Food and Drug Administration in April 2005. Upon its introduction, doctors heralded the drug as a major step in treating Diabetes as it was easier to inject than insulin and some patients experienced a side benefit of weight loss while taking Byetta.

A study looking at patients who used Byetta from 2004-2009 points to a higher risk of pancreatic cancer for patients who take the drug. According to a Sept. 23, 2011, article in USA Today, researchers at the Larry L. Hillblom Islet Research Center at the University of California, Los Angeles studied 2004-2009 information in the U.S. Food and Drug Administration’s database on adverse events, which are reported by doctors whose patients use these drugs. The researchers found that, when compared to other treatments, there was a 2.9-fold increase in reported cases of pancreatic cancer among those taking Byetta. They also found an increase in reported cases of thyroid cancer for Byetta patients.

“We have raised concern that there may be a link, but we haven’t confirmed it,” said lead researcher Dr. Peter Butler, director of the Larry L. Hillblom Islet Research Center.

In 2010, the FDA issued an alert warning that people taking GLP-1 analog drugs like Byetta may be at risk of developing pancreatic cancer.

Pancreatic cancer is the fourth most common cause of cancer death worldwide. In 2010, an estimated 43,000 people in the U.S. were diagnosed with pancreatic cancer, and 37,000 died from the disease. It is often referred to as a “silent killer” because in its early stages it often does not cause symptoms, and later symptoms are usually non-specific and varied. By the time a doctor can make a diagnosis of pancreatic cancer, it usually is very advanced.

Byetta has also been linked to other problems. In 2007, Byetta was linked to a higher risk of acute pancreatitis, a potentially life-threatening inflammation of the pancreas. In 2009, the FDA ordered the manufacturer to add information on the warning label stating the drug may be linked to an increased risk of kidney problems, including kidney failure.

If you or a loved one used Byetta and have experienced any harmful side effects, contact a drug injury lawyer at Elk & Elk. Our product liability attorneys, paralegals, doctor, nurses, investigators and economist will work hard to help you get the compensation you deserve.

Call 1-800-ELK-OHIO or fill out our online case evaluation form for a free consultation. When you choose Elk & Elk for your drug injury claim, there’s never a fee unless we win. Put our experience and resources to work for you.