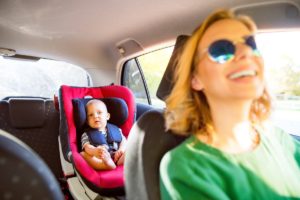 Distracted driving is a dangerous practice, something that all drivers should avoid.

But drivers don’t let these dangers stop them from using phones while they drive. In fact, distracted driving is more of a problem than ever.

Distracted Driving Accidents on the Rise

Over the past two years, there has been a 14.4 percent increase in traffic fatalities in the U.S. Experts contribute to this dramatic rise in traffic deaths to an increase in smartphone use while driving.

And drivers can’t stop. Even when their young children are in the car.

A recent study by the Children’s Hospital of Philadelphia and the Pennsylvania School of Nursing found that half of all parents use their phones while driving while their young children are in the back seat. A total of 760 parents and caregivers were surveyed.

What specific behavior did parents admit to while a child was riding with them?

Parents should implement a zero-tolerance approach to distracted driving. This is obviously important for safety reasons. But it is also important for parents to set a good example for the children that are closely watching them from the back seat. For more information, contact a Cincinnati car accident lawyer today.