Mumps Continues to Spread in Ohio 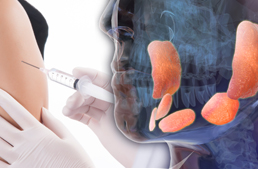 Updated 4/20/14 – What started as a health concern within Ohio State University campus has now become a community outbreak with  228 confirmed and probable cases of mumps in Franklin County out of 273 reports statewide.

Acute viral parotitis, better known as Mumps, is a viral infection found only in humans. Once a common childhood disease, mumps has become rare in the United States due to routine vaccination. The MMR vaccine protects against Mumps, Measles and Rubella. Alternatively, an MMRV vaccine is also available which adds protection against chicken pox (varecilla).

Mumps is spread by droplets of saliva or mucus when the infected person coughs, sneezes or talks. Sharing food and drink may also spread the virus. In addition, the disease may spread when someone with mumps touches items or surfaces without washing their hands and someone else then touches the same surface and rubs their mouth or nose.

Many people who get mumps have very mild or no symptoms, and therefore do not know they were infected with mumps. Symptoms typically appear 16-18 days after infection and include:

People who show symptoms usually recover after a week or two, but mumps can occasionally cause serious complications, such as:

According to the CDC, in 2006, the U.S. experienced a multi-state outbreak involving 6,584 reported cases of mumps. Another outbreak in 2009-10 included more than 3,000 cases. The Dayton Daily News reports that 11 other, unrelated cases have been confirmed in eight Ohio counties, including Ashland, Butler, Coshocton, Lucas, Medina, Pike, Richland and Ross.