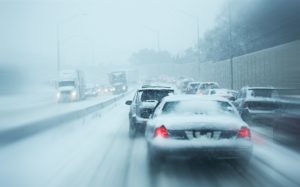 Most of us are used to seeing static speed limit signs on the side of a road or freeway.

However, as driving conditions change, the posted speed limit is not necessarily the safest speed to drive.

Winter weather can make for dangerous driving conditions in Ohio. Multiple car crashes and injury accidents are not uncommon as winter storms change traction on a road with ice, snow, wind or rain.

Slowing down may be obvious for most drivers as driving conditions change. But sometimes, slowing or stopped traffic might not be obvious to drivers until it is too late.

What happens when conditions change on the road either because of an accident or weather?

Up until recently, it was up to drivers to self-monitor and change their speed based on road conditions on a particularly dangerous stretch of I-90 in Lake County, Ohio. But the Ohio Department of Transportation is stepping in to try to make this stretch of highway safer for drivers.

Proponents of variable speed limits believe changing the limits based on road conditions will inform drivers well in advance of traffic concerns.  As a result, drivers can prepare for changes which will decrease stop-and-go traffic and improve traffic control in tough weather.

Do you think variable speed limits will increase roadway safety? Please share your thoughts in the comments section below.