Most of the morning’s discussion centered on baseball and the Indians, with a healthy sampling of Browns and Cavs talk mixed in. Here’s what Cleveland’s media personalities had to say about various topics:

Gerstenhaber: “I hate [what they did] as a baseball fan, but I don’t think it’s a big problem [for the sport]. The Astros being hated across the country – though a disgrace to the game – isn’t a big problem.”

Gerstenhaber: “Mic up the players. Spring training has been great since they’ve done it.”

Problems that baseball needs to overcome

Goldhammer: “When I was growing up, Ken Griffey Jr., Roger Clemens and Randy Johnson were the biggest stars in sports. They all had unique and different personalities. I think baseball has a serious star and marketability problem that is the number one factor.”

Gerstenhaber: “MLB’s efforts – while some are positive – to speed up the game are pointless. There’s no rule you can make in baseball that would significantly change the [length] of the game.”

Goldhammer: “It doesn’t help that Opening Day is on March 26.”

Why don’t the Indians get more attention?

Gerstenhaber: “Young people have no attention span. Football and basketball are action movies. Baseball is a drama.”

Peterlin: “[In other sports] we keep the conversation going when the games aren’t going.”

Baskin: “The Indians should keep him.”

Gerstenhaber: “[Paul] Dolan is a good owner. The Indians should absolutely sign Francisco Lindor. The only debate is does it make sense to sign a guy to a 10-year, $300-million deal. Lindor is a once-in-a-generation player.”

Gerstenhaber: “I don’t traditionally think we’re a baseball town. I hate to say that, especially [here] you probably think we are, but if you go look at the attendance numbers in the years the Indians are outside the playoffs, the numbers are horrible.”

Baskin: “The interest is there. The TV and radio numbers [are great]. ”

Gerstenhaber: “Cleveland as a small-market town is a bogus narrative. ”

Baskin: “Baseball is so regional. I don’t traditionally think [Cleveland] is a baseball town. Every football game is an event.”

Peterlin: “[Kluber] will be lucky to have an ERA near four in Texas. ”

Gerstenhaber: “[Emmanuel Clase] could become Aroldis Chapman. I think the best of Kluber is behind us. ” 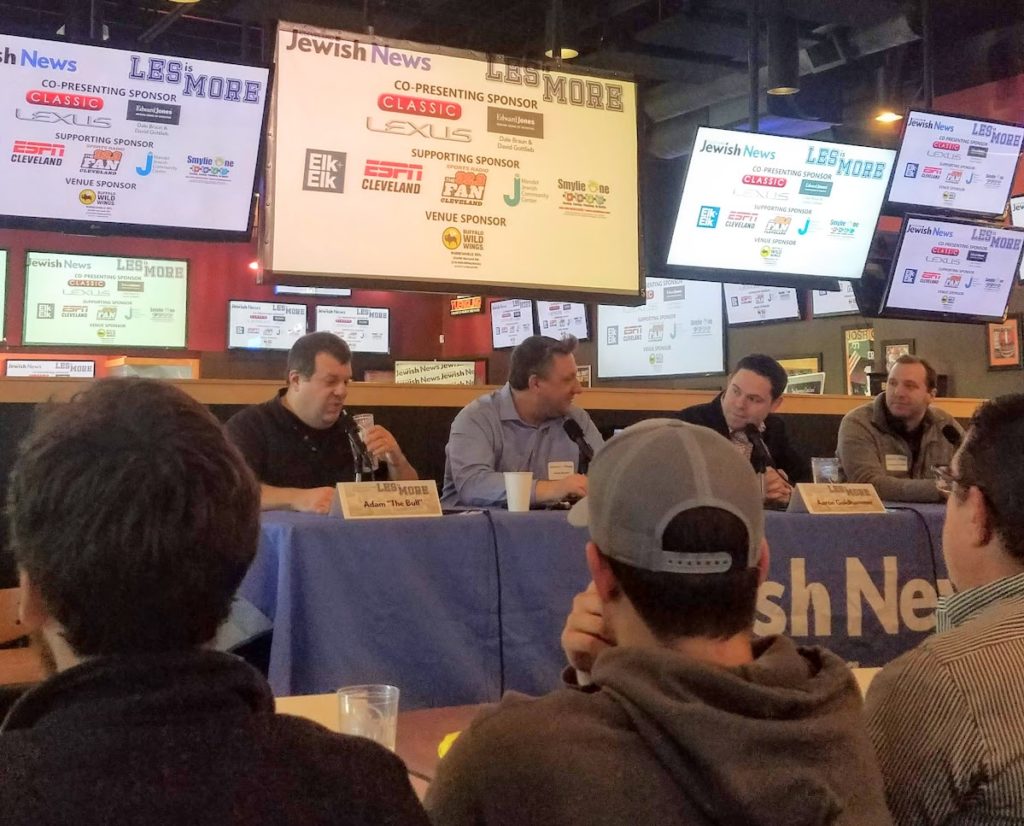 The panel had spirited discussions about the current sports landscape.

Goldhammer: “I think [the Indians] are conscious of clubhouse issues. ”

Gerstenhaber: “I had heard that he was fine here … The past couple of years, it’s been a bad offseason for baseball. ”

How will the Indians finish in the Central Division?

Gerstenhaber: “The Indians’ margin for error is slimmer than its been. [Mike] Clevinger, [Carlos] Carrasco and [Shane] Bieber are the three best pitchers in the division. I would predict Twins, Indians, White Sox. ”

Gerstenhaber: “The Indians are lucky to have Chris Antonetti, Mike Chernoff and Terry Francona.”

Gerstenhaber: “I wouldn’t watch the NBA at all if I didn’t [talk sports] for a living. ”

Baskin: “[Cavs owner] Dan Gilbert spends money like it’s crazy. He went all in and we won a championship. ”

Goldhammer: “My hope is that Bronny James gets drafted by the Cavs and LeBron comes back.”

Peterlin: “I’ve never seen a football fanbase like this.”

Gerstenhaber: “It’s inconceivable to me that the team could have been moved in 1995. Art Modell to the Hall of Fame should have never been a conversation.”

Baskin (on the team moving in 1995): “We thought we won just by keeping the name and colors.”

Levine (sarcasm): “Modell deserves to be in the Hall of Fame because he fired Bill Belichick and Paul Brown.”

Baskin: “He needs to be pushed. Baker has work to do.”

Peterlin: “I have optimism about Baker. Baker was right in believing he knew more than Hue Jackson and Freddie Kitchens. He never had a chance from jump street.”

Goldhammer: “He’ll be the most scrutinized player in the league.”

Peterlin: “Something changed with Myles. He’ll be [officiated] very hard.”

Gerstenhaber: “I don’t think he’ll be [officiated] differently. If we have another incident this year, that’s going to change it.”

Goldhammer: “Video replay should only be used when there is an egregious mistake.”

Peterlin: “If you go down that road [where everything is reviewable under four minutes], you run the risk of turning into the NBA where in the final two minutes it takes you two hours to get the game done.”

Gerstenhaber: “Everything should be reviewable. If it’s an obvious error, correct it. If you can’t tell in 15 seconds, move on.”

How to be a good owner in sports

Gerstenhaber: “Be involved but not too involved. Trust the people you hire until they prove to you that you can’t. If the owner thinks he is a general manager, [your team] is probably going to fail.”

Goldhammer: “Trust that the people you hire are going to do their jobs.”