Which football positions face the highest risk of brain damage? 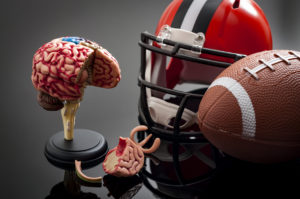 It’s no secret that football players are at risk for concussions. Nor is it a secret that repeated concussions can cause long-term brain damage. However, the details of those risks have yet to be fully fleshed out.

One recent study does shed light on how concussions differ – in location, severity and frequency – depending on the player’s position. The study examines the mechanics of concussions among running players versus linemen.

What the study shows

Running players tend to get hit at higher speeds. Overall, these hits typically involve greater force. Yet they tend to be spread out across the skull rather than repeatedly striking the same area.

For offensive and defensive linemen, however, the data paints a different picture. These positions tend to have the highest incidence of head trauma. Although individual hits may involve less force (with many not even rising to the level of detectable concussions), such repeated blows can cause greater cumulative damage over the long run.

What’s more, linemen tend to get struck in one area – the front of the helmet.

Linemen with a history of three or more concussions had higher rates of significant brain damage in the frontal lobe.

A player’s position isn’t the only predictor for CTE. Other factors include a history of repeated concussions, the severity and location of those concussions, and the duration of a player’s football career. Professional players experience the highest rates of CTE. Likewise, college players have a greater risk than those who only played in high school.

Many questions remain unanswered when it comes to the link between concussions and brain damage among football players. Nonetheless, the risks are apparent. Every football player should be aware of the danger and take steps to reduce their own risk.