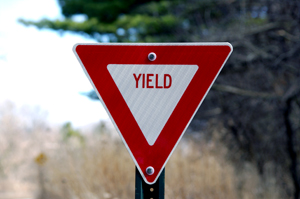 I was not surprised to hear that excessive speed is the leading cause of fatal motor vehicle accidents in Ohio. It also didn’t surprise me to read what the second leading cause of fatal accidents is: Failure to Yield violations. In 2012, motorists running red lights, stop signs or failing to yield to traffic caused 37,475 crashes in Ohio. According to the Ohio State Highway Patrol, these accidents killed 187 people and injured another 23,353.

The Highway Patrol is making a concerted effort to crack down on these violations. In 2012, troopers wrote 22,025 citations for Failure to Yield, a 3 percent increase from 2011. About one-fourth of the citations were issued after an accident.

It should be no surprise that the largest number of Failure to Yield accidents took place in counties with major metropolitan areas. Franklin County had the most crashes (5,430) with Cuyahoga County coming in second place (3,335).

Young drivers, ages 16-25, were at-fault in nearly one-third (30 percent) of these crashes. That is nearly double the rate of those aged 26-35 (16 percent). Parents need to remind young people often to pay attention when behind the wheel. There are too many things that can distract them and cause them to run a red light or a stop sign. Drivers of all ages need to put away their cell phones and focus on the road and the other vehicles around them.

If you’ve been injured in an accident, you need an experienced personal injury attorney. Please check out our website.