October 20-26, 2013 is National Teen Driver Safety Week. To mark the occasion, Elk & Elk is issuing a special challenge this week to the parents of all teen drivers with a special “5 to Drive” campaign encouraging parents to always set the rules before their teens hit the road.

Motor vehicle crashes are the number one killer of teens in America. More than 2000 teen drivers were involved in fatal crashes in 2011 – with almost half of those teen drivers being killed in those crashes.

Even more alarming, there was a 20-percent jump in teen driver fatalities in just the first six months of 2013. 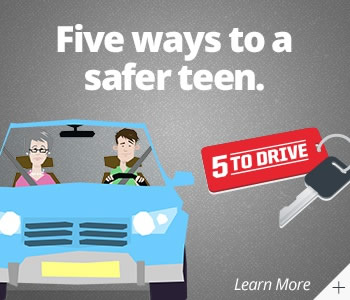 That’s why Elk & Elk is joining with the National Highway Traffic Safety Administration and other highway safety partners across the country to encourage parents to get the facts and to start the conversations—during National Teen Driver Safety Week and every week—to help keep their teens safe behind the wheel.

Parents have spent their entire lives trying to protect their kids, but then they hand their teens the keys to a 2-ton machine, and expect them to know what to do. We want to remind parents that they still have a lot to teach their teen drivers, and they should talk it out and always set the rules before their teens hit the road.

Each day during National Teen Driver Safety Week parents are encouraged to visit www.safercar.gov/parents for more information and key reminders about the “5 to Drive” – five specific rules designed to help save the lives of more teenage drivers and soon-to-be teen drivers.

The “5 to Drive” reminders that parents are encouraged to regularly share with their teens include:

While some might say such rules are fairly obvious, a recent survey shows that only about 25 percent of parents have serious talks with their kids about the key components of safe driving. The “5 to Drive” are designed to address the major contributing factors in fatal crashes involving teens.

We hope more parents will use National Teen Driver Safety Week as a way to get started in having direct and regular conversations with their teens about safe driving. Too many teen lives are being needlessly and tragically lost, and the numbers are only going up. So it is time for parents to swing into action and use the ‘5 to Drive’ before their teens hit the road.