Fireworks have become synonymous with Independence Day celebrations. Sold everywhere from wholesale distributors to the local grocery store, fireworks come in a wide variety of styles, each carrying its own risks.

“Every legally available backyard firework has been associated with serious injury and death,” Gary Smith, president of the Child Injury Prevention Alliance, said in a released statement. “Although some people mistakenly believe that backyard fireworks are safe if only adults handle them, our research shows that one-quarter of fireworks-related injuries to children occur to bystanders. These children were not using the fireworks themselves and yet they were still injured.” 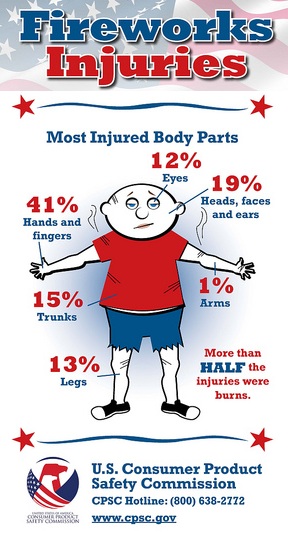 Consumer Fireworks such as bottle rockets, firecrackers, Roman candles and fountains may be purchased in Ohio only if the consumer signs an affidavit agreeing to remove the items from the state within 48 hours.

Professional Fireworks including display fireworks and pyrotechnics are illegal to purchase or use without proper licenses and training.

“Ohio Residents Advised Not to Use Home Fireworks over the Holiday” by Mark Kovac, Nordonia Hills News-Leader, July 3, 2013.