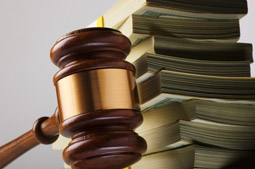 In a landmark fracking case, a Texas family has won $2.95 million from an oil company for years of sickness caused by polluted air from nearby drilling.

According to court documents, Robert and Lisa Parr filed a lawsuit against Aruba Petroleum Inc. in 2011. They claimed fracking operations near their property had released toxins into the air that harmed their health, killed livestock and forced them to leave their home.

CNN reports, “As a result of poor management and lack of emission controls, Aruba Petroleum created a ‘private nuisance’ to the Parr family by producing harmful air pollution and exposing them to harmful emissions of volatile organic compounds, toxic air pollutants and diesel exhaust, the lawsuit said.”

Hydraulic fracturing, or fracking, is the process of drilling through dense layers of shale and then injecting a slurry of water, sand and chemicals to release natural gas. Fracking is big business in the United States. According to fractracker.org, there are more than 1.1 million active oil and gas wells nationwide. Here in Ohio, there are upwards of 39,000 active wells, primarily in the eastern part of the state.

In a 2013 article, The Wall Street Journal revealed that at least 15.3 million Americans have a natural gas well within one mile of their home—that’s more than the population of New York.

While some laud the fracking industry as a boon for the economy, others are far more skeptical. Numerous concerns abound, ranging from environmental issues, such as water and air pollution, to cancer and other serious health problems.

The WSJ reports, “The federal government is weighing steps to make drilling less intrusive and safer. There is a rule set to go into effect in 2015 to require capturing emissions from fracking sites. The EPA is also studying the potential effect of fracking on drinking water and will release findings and recommendations in 2014.”

Sadly, these provisions will be enacted too late for some Americans, and safety advocacy groups point out that EPA fines are merely a “slap on the wrist” for multi-billion-dollar oil companies. When people are hurt by the negligent acts of large corporations, it takes an experienced civil litigator to navigate the maze of governmental regulations, deal with insurance companies, and obtain just compensation for the victims.