This article was originally published by Crain’s Cleveland Business. Article by Jeremy Nobile and photo by Ken Blaze.

With ads in print, radio and nearly every sportscast in Cleveland, the Elk brothers are arguably the most-recognizable lawyers in Northeast Ohio.

That’s entirely by design, even though the marketing side of the Elk & Elk business really began in the 1980s, when the firm was reportedly among the first companies in Ohio to buy full back-cover ads on phone books.

However, as David Elk, 79, and Arthur Elk, 70, eye the firm’s 40th anniversary in 2019, the two are plotting a succession plan and the next generation of leadership for their eponymous law firm.

David, the firm’s original founder and a senior partner today, whose wife serves the business as CFO, said that while he expects to slow down, he also plans to keep working as long as he can. Arthur, who’s run the firm as managing partner for years, wouldn’t mind spending a little more time with family, but has no immediate plans to leave the practice.

Acknowledging they can’t work forever, though, the firm has announced that James Kelley III, 49, who has helped grow the business since joining the firm in 2002, will be working alongside Arthur as co-managing partner to prep for a formal leadership transition in the coming years. 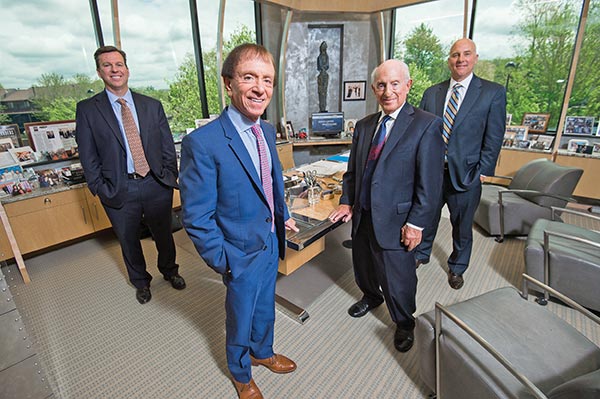 “I truly love my job,” Kelley said, noting the firm’s approach to the market makes work fun and exciting whether it’s in the courtroom or outside of it.

“It’s truly a combination of unique, advanced frontline marketing with truly established trial attorneys well-supported by ancillary staff,” Kelley said. “I think the thing that really worked was there became a symbiotic relationship between the marketing side and the trial side.”

For a firm so prominent across Ohio — and one now developing its work in other states — the business started from humble beginnings before becoming the aggressive outfit it is today, whether that’s on the trial floor or marketing on airwaves.

From public office to plaintiff’s firm

Out of law school, David Elk worked at a Cleveland personal injury firm for about seven years. The partnership there eventually split, and David hung his shingle, starting his own firm, David Elk Co. LPA, in 1979 in the city’s downtown. Meanwhile, Arthur Elk was making a name for himself in Ashland County, where he became an assistant county prosecutor following law school.

Just two years into the job, the reigning county prosecutor went into private practice, and Arthur found himself in a hotly contested election for the position.

Arthur ended up winning the 1976 election, making him one of the youngest county prosecutors in Ohio at the time.

He’d go on to prosecute several high-profile murder cases. One macabre case involved a young child beaten to death by his mother’s pimp.

“It was handling cases like that that got my passion, my juices flowing in the law,” Arthur said. “I loved standing on my feet and trying to help the victims of crime.”

Arthur actually announced his candidacy for state senate in the late 1970s. He was seeking a seat then held by Tom Van Meter, who was challenging (and eventually lost to) Jim Rhodes for the Republican ticket in the coming governor’s race.

He took a test drive of sorts in the Senate after planning to run in the race. “The guys there rolled out the red carpet for me,” he said.

But he didn’t love it.

The way government works — the often-slow pace with how things get accomplished, the political races — left Arthur unimpressed.

He left after two weeks. And, seeing a need for a plaintiff’s firm in Northeast Ohio, he pitched a partnership with David.

“With the idea of opening my firm with my brother, who I’m still very close with, I liked the idea that we could start from scratch with two nickels in our hand and try to help people,” he said.

With the reputation he already had, why not seek out work at a one of the market’s large, prestigious law firms during the veritable heyday for Cleveland businesses?

That also didn’t appeal to him.

“The idea of doing something for somebody, doing the best job you could and only getting paid if you’re successful, that was more appealing to me as opposed to working at a big law firm that’s all about billable hours,” Arthur said. “So that’s what I did.”

The two joined forces and in 1984, Elk & Elk was officially opened.

Marketing: a key to growth

Phone books were “in vogue” through the 1980s, Arthur recalls. And while the firm was actively looking at charitable avenues to get its name out there, it was the meeting with salespeople from Sprint that led to Arthur convincing his partners to invest in the back-cover ads. They cost between $1,200 and $2,000 a month, he recalls.

And it wasn’t long before most phone books in Ohio had the law firm’s ads on it. What seemed like a gamble at the time paid off as the phones rang consistently.

Fast forward to 2002, when Kelley was recruited from Cleveland law firm Reminger after battling Elk attorneys on the defensive side for several years.

He convinced the firm to put an even greater emphasis on marketing, expanding the budget there and hitting TV airwaves in Cleveland, Columbus, Cincinnati and parts in between.

They won’t share what their marketing budget has grown to, but it’s significant. The firm is effectively two businesses today between its marketing division and the law firm itself. That, coupled with a fresh approach to viewing cases and really deciding which to take, led to a more efficient and productive business.

But marketing even helps recruit other attorneys and, they feel, promote credibility in a business where lawyers are sometimes viewed pejoratively as ambulance chasers.

Kelley and company are aware of that, but take exception to the label.

While they take about 30% to 40% of what’s won in a case, they only get paid if they win. When they talk about taking a case, they pitch it in terms of helping a victim “get an answer.” That applies most often to issues like medical malpractice, where circumstance of the incident can be difficult and time-consuming to truly understand — versus traffic accidents, which tend to be more straightforward.

Similarly, those cases can ebb and flow in frequency. Some are more common than others, but invite lighter paydays than major, less-infrequent malpractice suits.

But Kelley, noting that there can be up-and-down years because of the sometime unpredictable nature of cases to work, said they tend to view top-line growth in three-year chunks. He said that in each of those periods, the firm’s revenues have grown on average about 5% each period.

Last year was the firm’s best year yet, according to Kelley. The firm reports serving more than 20,000 clients so far to date and recovered more than $1 billion.

For Kelley, winning a case is rewarding, but even more so when doing it for someone who never thought they’d need them.

“We’re in a business that people think they’re never going to need,” he said. “So no matter where the advertising is, it’s intrusive. No one wakes up and says today is the day I’m going to get hit by a car or see medical malpractice. And it’s frustrating when you’re working so hard and you feel like you’re doing something for society as a whole like, uses as a political pinball.”

But when accidents do happen, that blanket marketing helps increase the chances people will call them.

Today, the firm, based in Mayfield Heights, has offices across Ohio, plus one each in Cincinnati, which also serves the upper end of Kentucky, and Seattle. It counts about 20 lawyers and more than 60 support staff, which includes physicians and investigators.

Besides growing, there are plans to evolve the marketing approach, as online ads are considered.

Another 15 years from now, Kelley could see the business dabbling in possibly two or three other new markets.

The plan moving forward is for the same slow and steady growth the firm has enjoyed these past decades. That means more commercials, more partnerships with sports teams — sportscasts are useful because live TV is preferred over more recordable shows in which ads are skipped on DVRs — and more charitable work. It also means reworking their approach to ads. Just as phone books have fallen out of style, new avenues are being considered for their print and TV ads, including some things that could run online.

But that’s all besides winning cases, where the firm has a reputation for almost always going to trial.

“That drives up the value for clients,” Arthur said, “because the opposition knows we will spare no resource to make sure our clients get the results that provide justice for the injuries they received.”

And as far as who’s the best fit to lead that drive in the future, the Elk brothers think Kelley — who will be supported by partner John O’Neil, 52 — are putting their weight behind the attorneys most instrumental in the firm’s growth.

That means Kelley will be in line for those ubiquitous commercials. Some spots have already been shot, even though it was literally written in his contract 16 years ago that he wouldn’t have to do those.

“That’s probably not something I’m going to sue over,” he said with a laugh.