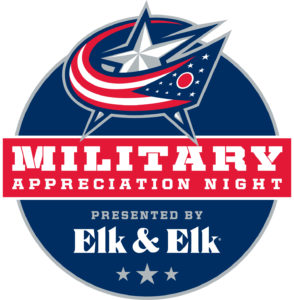 The Columbus Blue Jackets will salute those who have served or are currently serving in the nation’s armed forces during the club’s annual Military Appreciation Night, presented by Elk & Elk, on Thursday, January 18 when the Jackets host the Dallas Stars at Nationwide Arena. Game time is 7 p.m. and the first 10,000 fans will receive a Blue Jackets branded phone wallet courtesy of Elk & Elk. The evening will feature a special ceremonial puck drop and a host of themed activities, fundraisers and tributes to show support and gratitude for all active and retired service personnel.

Personal Care Items Collection for USO Lounges: Before the game, donations of personal care items and snacks will be accepted by USO volunteers on the Front St. and McConnell Blvd. plazas outside arena entrances. Items collected will be donated to stock central Ohio USO lounges that offer respite for military personnel and their families. Fans who donate items will receive a voucher redeemable for a pair of tickets to select Blue Jackets games in February or March.

Camouflage Jersey Raffle & Auction: Blue Jackets players will wear camouflage-style jerseys during pregame warmups prior to the game. The complete set of authentic worn jerseys will be individually autographed by players with select jerseys – Josh Anderson, Pierre-Luc Dubois and Artemi Panarin – up for charitable auction.  All other jerseys will be available through a raffle. Mobile bidding and raffle sales open Thursday, January 11 and run through the second intermission of the January 18 game. Fans can text CBJAUCTION to 52182 or visit cbjauction.gesture.com to participate. Raffle tickets, priced at $10, can also be purchased in-arena. All winners will be notified on January 19.

Themed T-shirts & Game Pucks: Ohio-themed military pride three-quarter length T-shirts and a limited quantity of Military Appreciation Night pucks from that evening’s warmups will be on sale at the Blue Jackets Foundation kiosk, located near sections 110-111 on the main concourse. T-shirts and pucks will each be priced at $30.

The Blue Jackets also will host more than 1,000 military members and their families representing the USO of Central & Southern Ohio, Fallen 15 and the 121st Air Refueling Wing among others at the game. In addition, the Ohio Warriors sled hockey team comprised of disabled veterans will take the ice during the first intermission. Throughout the evening, True REST Float Spa Columbus/Powell will be giving away floats to active and retired service personnel. All fans in attendance are encouraged to share their Military Night photos using the hashtag #CBJUSA.

Tickets for all home games are currently available for purchase online at BlueJackets.com, Ticketmaster.com, or in person at the Big Lots Box Office at Nationwide Arena, OhioHealth Chiller Ice Rinks and all Ticketmaster Ticket Centers.  Fans may purchase tickets by phone at (800) 745‐3000.